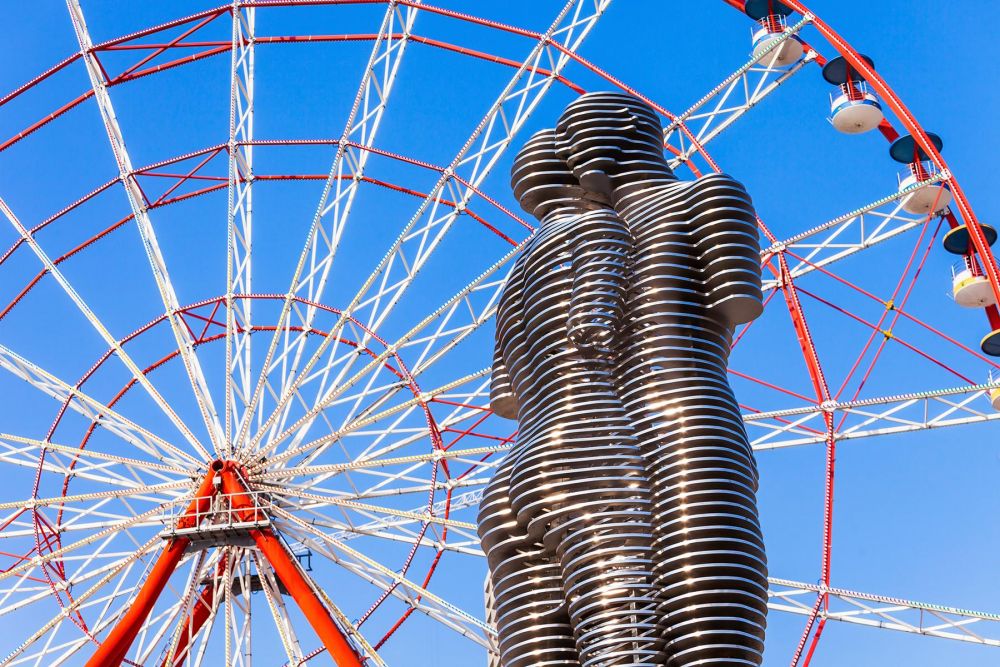 Why Georgia (the Country) Belongs on Your Travel Wish List

When I began telling friends that I was going to Georgia—a country that had been on my wish list for a long time—I got all sorts of responses. Some thought I meant the state. Some asked if it was safe. (Yes.) Others had their eyes light up with envy or happy memories of their own trips to the country. And one gave me some useful packing advice: Bring loose-fitting clothes and pants with elastic waistbands.

The food in this former Soviet republic, at the crossroads of Europe and Asia, is superb. And wildly abundant. The word for a Georgian meal is supra, which is best translated as “feast.” This is no joke. There is also a saying that “the guest is a gift from God,” meaning hospitality is valued—and largely expressed through cooking.

At some restaurants, servers put plates of food on top of other plates of food because there is no more room on the table. The bread, which is made in an unusual, traditional style using a clay oven, is addictive. The tomato and cucumber salad that shows up at every meal is consistently delicious. In fact, all the fresh vegetables are extraordinary. There are pies filled with cheese and meat, sausages galore and dumplings stuffed with all sort of things. And there is always more.

I didn’t have a single bad meal during a nine-day trip (as a guest of the tourism board), but the standouts were at the cozy Poliphonia in Tbilisi and at Pheasant’s Tears, a boutique winery in the charming town of Sighnaghi, known as the “city of wine and love” (thanks the 24-hour availability of civil marriages).

My companions and I laughed at that name, because all of Georgia is a place of wine and love. The latter is seen in that genuine hospitality. As for the former, the country is considered the birthplace of wine, with evidence of viniculture stretching back more than 7,000 years. There are more than 500 varieties of grapes grown all around the country, and winemakers making traditional wines in clay jars and adventurous ones with contemporary techniques. Many are natural or organic, and most are delicious. (And the quantity of the wine tends to keep pace with the quantity of food at those meals.)

Food and wine are the main draws for Georgia—and a primary reason that visitor numbers have doubled since last year—but hardly the only one. The High Caucasus are stunning, dotted with picturesque villages and ancient churches. (The country was also one of the world’s first to adopt Christianity, in 337 A.D.) They’re also ideal for hiking. There are natural hot springs and sulfur pools, especially the ones near Borjomi Park.

And then there’s Tbilisi, a city that has been sacked 27 times but emerged as a distinctively cosmopolitan place with contemporary architecture mixed in with the historic buildings, a rich café culture and a boom in wine and cocktail bars. It is one of the few cities left in the world that feels like absolutely nowhere else. I saw one Wendy’s and one Dunkin’ Donuts, but that was it for globalization.

At the massive Saturday flea market, you can buy a gas mask, Soviet military paraphernalia, random taxidermy or beautiful enamel jewelry. From there, you can stroll through the trendy neighborhood of Plekhanov, with its old-style houses, its lively Agmashenbeli avenue and the multifunctional Fabrika, in which cafés, bars, ateliers and boutiques fill a former Soviet sewing factory.

Speaking of cool, the boutique hotel scene is something of a surprise. While the old-school, five-star Ambassadori makes a perfectly lovely home base (with a gorgeous cocktail bar), I swooned when I saw the new Stamba, a Design Hotel in a 1930s publishing house, where the original printing presses still squiggle overhead and giant trees soar in the five-story “living lobby.”

It’s right around the corner from the Rooms Hotel, an outpost of a homegrown brand that’s gaining something of a cult following among hotel nerds like me. It’s likewise trendy and stylish. The Rooms Hotel Kazbegi is no less chic while being suited to its mountain environment.

After all, it’s important to have a nice place to nap after that midafternoon supra.