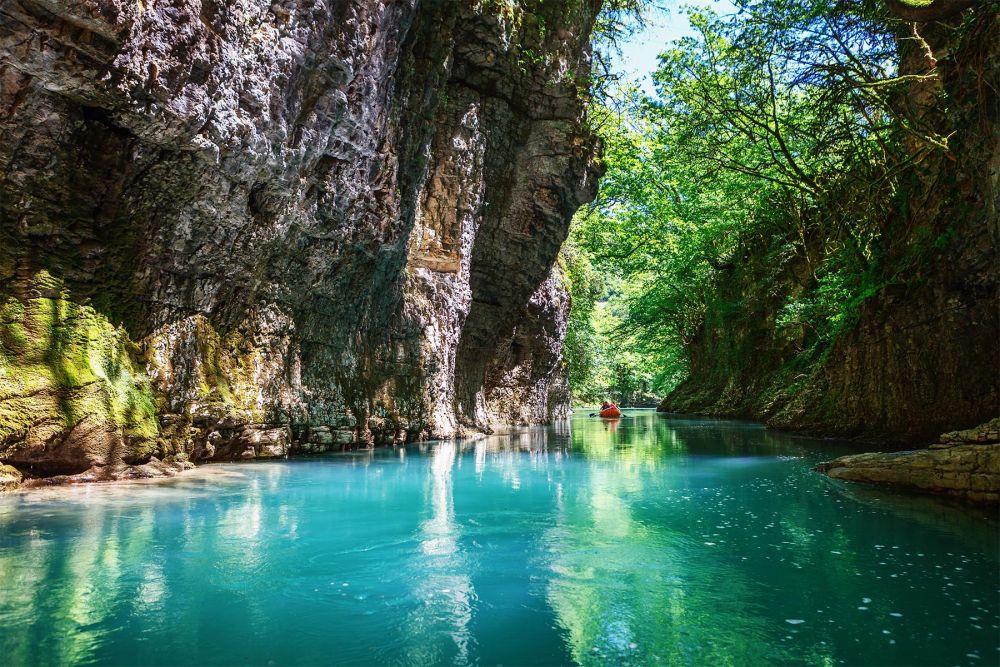 Why Georgia’s Black Sea Coast Is the Ultimate Summer Getaway

Move over French Riviera, we’re heading to the beach in Georgia this summer.

In the Caucasus mountain range on the Eurasian continent between the Black Sea and the Caspian Sea, Georgia shares borders with Azerbaijan, Turkey, Armenia, and Russia. Its intense and varied history includes influences from both Eastern Europe and Western Asia, which is evident in its cities, architecture, religion, art, and music. In spite of these outside influences and multiple invasions over the millennia, Georgia remains fiercely unique and unlike any other country in Europe or Asia. West Georgia’s four Black Sea regions include Ajara, Guria, Samegrelo and the breakaway region, Abkhazia, which is now controlled by Russia. While Tbilisi and the Caucasus Mountains seem to take precedence on the world tourism stage, the Black Sea area of Georgia has a charm all its own and is ready for the spotlight.

Batumi: The Pearl of the Black Sea

Batumi is located in the autonomous region of Ajara, close to the Turkish border. It’s a coastal city with a subtropical climate, which makes it an ideal holiday destination for Georgian nationals as well as travelers from neighboring countries. Its wonderful weather makes outdoor activities ideal and it has become one of the party capitals of the region. Visitors could spend a lovely day walking the seaside promenade followed by an unforgettable night of dancing and club hopping. It’s a city of architectural delights that recall Dubai, Istanbul, the Byzantine Empire, and central Europe all at once, and can be admired both day and night.

Cities like Anaklia and Batumi have gained a reputation throughout the former Soviet Union for what has been dubbed “techno tourism.” Partygoers can dance until the morning at various clubs in Batumi, at a number of resorts in Anaklia, and most importantly during the GEM fest, which takes place the first or second week of August. As Georgia’s reputation as a techno capital grows, it appeals more and more to famous international DJs, which in turn attracts a more international crowd.

While under Russian and Soviet control, Georgia’s Black Sea coast was dubbed the Russian Riviera. Soviet workers were entitled to twenty-three days of rest and would be sent to state-sponsored sanatoriums in the south, mostly in Georgia. Many of these resort towns were made famous during the Russian Empire. In Kobuleti, Alexander II built a palace and spent many summers there with his family. There is a still a great deal of nostalgia for these places, and towns like Kobuleti are still famous as medical centers where guests can take the mineral waters believed to treat a number of ailments. In the less developed region of Guria, people come for the magnetic sands that are said to stimulate the metabolism and immune system. In the town of Grigoleti, visitors take hot sand baths for the healing effects.

The Batumi Botanical Garden is one of the most beautiful and diverse in the region. It covers 111 acres and contains species from different regions including East Asia, New Zealand, North America, Mediterranean, Australia, the Himalayas and of course, the Caucasus. It boasts one of the most diverse collections of flora in the world. The garden is located outside of the city center and along with everything else, offers gorgeous views over the sea. For bird lovers, Kolkheti National Park lies between Guria and Samegrelo and can be reached via the port city of Poti. It’s considered to be one of the most important areas on the Black Sea for ornithologists due to its wetlands, which are important for 21 species of migratory birds. In total there are 194 species of birds that can be found in the park, making it a highlight for birders and ornithologists alike.

Georgian food is one of the trendiest cuisines in the world at the moment, with khatchapuri (cheesy bread) and khinkali (soup dumplings) taking the mother lode of the attention. Due to the warmer climate, the food in the west is much more aromatic and spicy than the rest of Georgia. Each region has its own culinary traditions, and the most famous from the Black Sea is, of course, Khatchapuri Acharuli, a calorie-laden bread boat filled with sulguni cheese, and topped with a pat of butter and a raw egg. Winemaker Keto Ninidze of Oda House is reviving and maintaining the Megrelian kitchen at her winery, where guests can taste carefully curated dishes and take cooking classes, or go explore the nearby Zugdidi market and load up on Ajika, an aromatic and spicy condiment that originates in Abkhazia. Georgia can also rightly claim to be the oldest winemaking country in the world, with more than 8000 years of unbroken wine culture.

Though not right on the coast, Martvili Canyon in the Samegrelo region is the perfect day trip for those flying in or out of Kutaisi. Once you’ve had enough relaxation in the sun and partying until the early morning hours, make a stop at Martvili Canyon, which was once the private swimming hole of the royal Dadiani family. The natural azure blue water and swimming holes within a deep canyon space will mesmerize even the most jaded guest. Thanks to a $500,000 grant from the government, the area has been streamlined with walkways and boat rides along the canyon that have made visiting a much safer experience than it had been in the past. (Unfortunately, in the early 2000s, tourists had been injured while trying to get the perfect selfie or cliff jumping.) While daredevils are no longer a part of the experience, this natural wonder makes Martvili Canyon a must-visit place for hikers and those who love canyons and waterfalls.

Lovers of modern and contemporary art have another reason to stay in Batumi, where one of the world’s most spectacular statues in the world can be found. The mobile statue is of star crossed lovers Ali and Nino, who were separated in World War I. Ali was a Muslim from Azerbaijan and Nino a Christian Princess. At 7 pm each day, the lovers dance around each other and kiss. This performance takes place every 10 minutes until dawn. A walk down the seaside promenade is another opportunity to discover public art and modern architecture. Many of the pieces are a homage to Georgian culture and myth. The Georgian Alphabet Tower is a celebration of Georgia’s unique language, resembling strings of DNA that are decorated with each of the 33 letters that make up the Georgian Alphabet.

Guria’s subtropical climate and rolling hills make it ideal for tea growing. Though Georgia cannot claim a long past of tea production, the industry was established in the nineteenth century when Prince Mika Eristavi smuggled tea seeds out of China. The Russians had a voracious thirst for tea and Georgia supplied it throughout the Empire and the Soviet Union. The tea industry suffered post-Soviet collapse, but recent investments are funding the restoration of the plantations with wonderful results.

Ancient Colchis was well known in the classical world, by Greeks and Romans alike. History buffs will very much enjoy visiting the Roman Fortress at Gonio, 15 km from Batumi. Its construction dates back to the late Roman period and is a testament to the ingenuity and eternal nature of Roman construction. The fortress was built as a military outpost for defensive purposes and it is now a State museum that allegedly contains the grave of Saint Matthew.